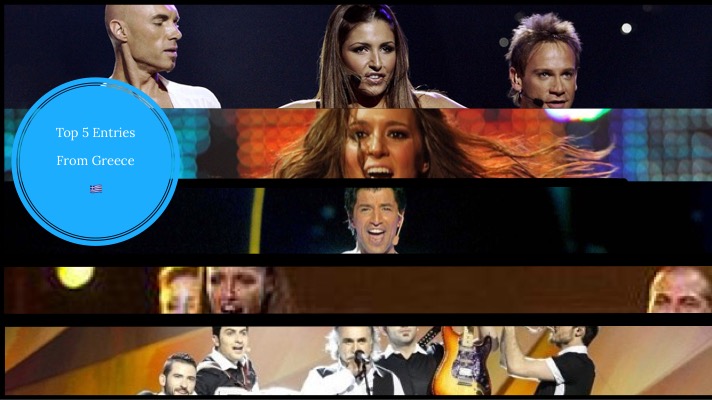 Today is the independence day in Greece, so in order to celebrate, we made a list with the Top-5 entries from the Mediterranean country!

In 2013, Greece was represented by the greek group Koza Mostra and the folk singer Agathonas. When you hear of Greece you most likely to think about bouzouki and this song has a lot of it! The artists made an unpredictable collaboration and the result was a success! Greece finished 6th that year (first time for the country) among 39 countries, with 152 points. The song was the highest ranked no-English song of the night.

Number 4: Antique – Die For You

Antique was the duo that represented Greece in 2001. The duo was consisted by the Greek goddess Helena Paparizou and Nikos Panagiotidis. Their song, Die For You was a mixture of greek laïko and Europop. The lyrics were in both Greek and English. At the night of the final, the entry was voted by all the countries – neither the winner nor the second placer did the same. The song received 147 votes and came third. This was the best place of the country till that contest. This is a very special entry for Greece because was the first of the Greek Golden era in Eurovision.

The third best entry of Greece was in 2004. Sakis Rouvas an established artist in his country was selected to represent his country. The song is a pure pop dance song with some traditional parts. Sakis’ dance was what the crowd expected and the song came third in both the semifinal and the final from 36 entries. At the final, it received 252 points the most that Greece has ever received till this day – both in old and the new voting system. Is noteworthy that the song lyricist is the same as Serhat’s 2016 song.

The second best entry of Greece came in 2008. Kalomira was selected through a national selection. My Secret Combination was a very dance-pop song with an amazing staging. The song won its semi and received 218 points in the final finishing third from 43 entries. Kalomira was also speculated that would represent the country this year but Katerine was the lucky one.

Number 1: Helena Paparizou – My Number One

The first and only till today win for Greece came in 2005. After many attempts, the country finally got the gold! The song was a pop song with some traditional parts. The staging was simple but perfect for the song, with Helena wearing a shiny dress. The song received 230 points and came first in 38 countries. The song held two records. The first one was that Greece scored an average of 6.05 points perjury a record that broke the Azeri winning entry in 2011. The song also tied with UK 1997’s entry for the most 12-points given to a single country. Today this record is held by Euphoria.

The country has participated in the contest 39 times since 1974 and has missed the final only two times. This year Katerine Duska represents Greece with the song Better Love. We wish Happy Independence Day to all our Greek readers and good luck in this year’s contest!

What is your favourite Greek entry? Is it included above? Write your thoughts on the comment box below.